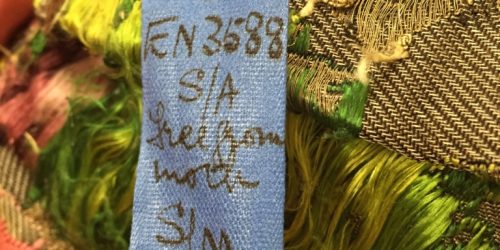 For the last few months we have had the great privilege of examining and undressing some of the Royal Funeral Effigies from Westminster Abbey, as featured in a recent article in The Guardian. The effigies are being checked for pest activity and re-conserved in preparation for the Abbey’s wonderful new museum, The Queen’s Diamond Jubilee Galleries

The effigies that we are assisting with date from the early 17th Century starting with Elizabeth I’s effigy from 1603 and run through to Viscount Nelson’s from 1806. During the examination process we have found what we think are examples of early dry-cleaning labels – twelve in total so far.

There is evidence that the multi-layers of original clothing from the effigies have been repaired, restored and conserved many times over the years – the history of this repair is almost as fascinating as the garments themselves.  Westminster Abbey archive contains tantalising snippets of information about their past repair including very early notes of sums paid for their refurbishment in the 18th Century and later letters and conservation reports outlining some of the work in greater detail.

During the 1930’s most of the clothing from the effigies was repaired by the Victoria & Albert Museum with much of the cleaning being undertaken by Sketchey Dye Works. The archive contains letters from one of the Sketchley Dye Works premises in near by Brompton Road, Kensington assuring the Abbey of the very special attention and utmost care that will be paid to the cleaning of these historic textiles. Some mention the costs involved but nothing about the actual cleaning processes or solvents being used.

Sketchley Dye Works were founded in 1885 by A E Hawley & Co bleaching, dyeing and finishing hosiery. They also began French (dry) cleaning in the late 19th/early 20th Century – this side of the business became hugely successful with clothing drop off branches opening in almost every town in the country. In the earlier years, the solvent cleaning was normally undertaken in large out of town factories due to the risk of fire. According to some quick internet research it seems that by 1928, Stoddard Solvent had replaced the more explosive solvents used in the 19th Century such as turpentine and kerosene and then in the 1930’s the chlorine-based solvent tetrachloroethylene, or perchloroethylene (perc), was introduced. So we can maybe assume that either Stoddard Solvent or the newer Perc was used to clean the effigy costumes.

We think that the labels we have found must be associated with Sketchley Dye Works due to the similarity in dates mentioned in the dry cleaning letters found in the archive from the early 1930’s and those found on the labels. They are made from either cream or blue cotton tape hand written in black ink sewn onto the seam allowances or edges of the garments. They appear to have been marked with an identifying number, possibly the Sketchley Dye works job number used to identify which of the effigies the garments came from. There are also series of letters that we think must be related to the condition of the historic garments and possibly the solvent used to clean them or the method employed. Many also have the date, presumably of when they were cleaned.

It would be really interesting to know if anyone has seen similar labels attached to textiles or costume in their museum collections. Or if anyone with more knowledge of the history of dry cleaning has come across similar labels or has information to add about the methods used in the 1930’s.  Please do contact us if you have any comments that might add to our knowledge about these fascinating labels.