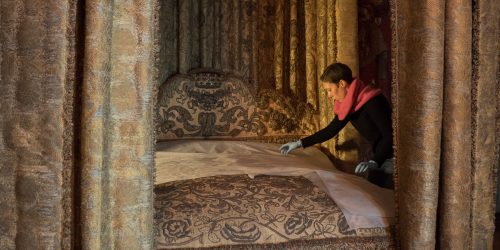 If winter is a time that makes one think of stillness, hibernation and dormancy, it’s been nothing of the sort here, quite the opposite in fact. With a spring in our step, it’s all go-go-go at Zenzie Tinker Conservation. Spring is an excellent time for cleaning, tidying and sprucing. With many of our clients getting ready to open up to the public again after a long winter, this is one of our busiest times of year.

January saw the continuation of site work at Knole (National Trust NT) in the King’s bedroom. In preparation for the NT’s final phase of refurbishment the room needed to be emptied, except for the state bed which is far too fragile and tricky to be moved out of the room. We wrapped the rather large and stately King’s bed in tissue and Tyvek and made protective Tyvek boxes for four feather plumes, removed due to their fragility. Then the spectacular 17th-Century Nebuchadnezzer tapestries were removed, carefully rolled and interleaved in tissue and polyester wadding for safekeeping. The caffoy curtains were taken down, wrapped with care and packed with the dressing table cover.

Following on from our past conservation treatments of the Garden Room and Library curtains at NT property Nymans, we’ve been involved in the designing and making of protective, hidden blackout curtains. These will enable house staff to control light levels in the rooms and the historic curtains can now be left static in their display positions.

From February we’ve been a dual site conservation team, beginning our conservation assessments of the funeral effigies of Westminster Abbey. We are thrilled to welcome back Rachel Rhodes to our team of conservators on this project (Rachel has recently returned to us following three years working in the USA). The effigies are to be one of the main attractions in the new Queen’s Diamond Jubilee Galleries in the Abbey’s medieval Triforium to open in 2018. It has been such a fascinating privilege to see the multi layers of historic costume mounted beneath the outer robes of the effigies.

We are very excited to welcome Georgina Gilmore into our team. Georgina is a Curator at Brighton Museum and has joined us part-time as Conservation Studio Programmer and will be helping us to keep our tight ship sailing.

This month we have been cleaning the final four tapestries of the set of ten designed by Henry Moore for the Aisled Barn at the Henry Moore Foundation. Following freezing each tapestry has been thoroughly surface cleaned by Chris and Mira who have also replaced the previous Velcro hanging mechanism which was causing puckering. Following building work they will be re-hung in the summer.

Mid February some rather delightful gilded feather fans made by Oliver Messel came to us from Nymans; Ania, who loves making boxes, designed and made rather special storage boxes to keep the fans safe and to minimise unnecessary handling. The design is versatile. It enables two fans to be stored in one box. It is suitable for long term storage. It is also aesthetic so the boxes could be used for display purposes too.

As part of our spring regeneration theme, some of our team have been back at Arundel Castle throughout February and into March. The tapestry we conserved last year, ‘Le Chameau et L’Elephant’ has now been re-hung in the Baron’s Hall. The colours are much more vivid now and the structural repairs undertaken by Mira, Chris and Hazel have meant the exotic animals in the scene now look in much better health. It would seem that we are all rather fond of the anteater that has real presence in the proper left corner. The return of the tapestry was featured in The Times. We also designed and installed a Tyvek dust cover on a pulley system for use in the closed season for the tapestry and then waited for the complex scaffolding to be taken down and re-built at the other end of the Baron’s Hall. Once declared safe, Minny, Mira and Chris scaled the dizzy heights of the three storey structure to access the second tapestry from the series. This was surface cleaned in time for the re-opening of the castle on Good Friday.

Spring has also seen the start of a new project back at Arundel Castle where we are conserving the elaborate Hammercloth from the Norfolk Chariot. A Hammercloth for those unfamiliar with the term, is a covering that was traditionally put over the coach box or drivers seat. The name derives from the practice of carrying a hammer and nails in a small bag hidden by the cloth, the equivalent of the modern day tool bag. Unfortunately, in years gone by, this particular Hammercloth was home to a colony of voracious moth larvae. We plan to re-cover areas that are beyond conservation and will be conserving as much of the original structure and the beautiful braids as is possible. The chariot itself is in surprisingly good condition and it is hoped that this too will be conserved and displayed alongside other vehicles associated with Arundel Castle.

During the Spring, Hazel conserved and mounted a lovely family wedding dress from Little Malvern Court, dating from 1896. The dress came with a photograph showing the statuesque Olga Mendez de Monsanto and press cuttings about her huge society wedding. Conservation work began with a thorough surface clean all over. As was common with dress of the period, our wedding dress arrived with two sets of sleeves so that a dress could be altered to wear for many different occasions. Hazel swapped the sleeves over as these were more like those in the photograph provided and puffed them up beautifully to give an aesthetic to suit the proportions of the dress. The original orange blossom wax flowers around the neckline were missing so vintage replacements were sourced and these were first carefully cleaned before being stitched onto the dress. Crease removal made the dress look smooth and elegant for display. The mannequin was carefully padded and underpinnings made to keep the dress nicely supported and create the correct profile. The wedding dress is now on display at Little Malvern Court.

And what of Ania and Minny this Spring? Ania has been deeply engrossed in the conservation of a beautiful Schiaparelli costume and Minny is still grappling with the Kedleston tester, more of both these projects next time…