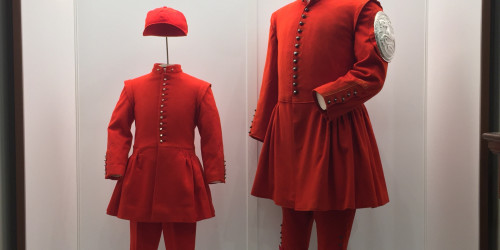 The Doggett’s Race, a four mile race on the Thames passing under 11 bridges began in 1715 and is believed to be the oldest continually competed sporting event in the world.  Started by Thomas Doggett, manager of the Drury Lane Theatre the race taken over by the Fishmongers’ Livery Company after his death in 1722. Originally apprentice water men single-handedly rowed their ferry boats competing against each other and the outgoing tide. Nowadays young rowers compete in what is thought of as being one of the toughest rowing races in the world in contemporary single sculling vessels against each other and the incoming tide. The prize remains the same as it was in the 18th century: a smart red coat embellished with a heavy silver badge, designed by Thomas Doggett himself.

The Fishmonger’s Company asked us to conserve and mount one of their Doggett’s uniforms together with a child’s version of the same. They were required for a new display in the lobby area of the ground floor following some refurbishment work to their their beautiful Hall sited on the Thames at London Bridge.

The adult uniform (coat and breeches) was that worn by Herbert Clark, winner of the race in 1948 and portrayed in a painting that hangs resplendent in the Hall. In honour of the new display, Herbert Clark’s sons agreed to lend their father’s prize badge so that it could be shown mounted on the sleeve of the coat. Meeting one of the son’s when he delivered the badge to the studio was one of the highlights of the project; it was so touching to see the pride evident in his voice when he talked about his father and the what winning the race had meant to the family.

After surface cleaning, the adult coat and breeches required some stitched repair to moth damage in both the wool outer and lining of the coat. Both uniforms were mounted on full torso mannequins from Proportion London, custom padded to fit each costume. Arms and legs were custom made too, using polyester wadding and a cotton outer layer, the support pole for each mannequin was inserted inside one leg of each pair of breeches. To support the additional weight of the full coat skirts an additional “over-petticoat” was made for each mannequin.

The very heavy weight of the ceremonial badge on the sleeve was a slight challenge to mount; in the end we ordered an articulated wooden arm from Proportion which we padded to resemble the other arm supports. This had the added advantage of being able to be put in a crooked arm position. The badge was secured using the original ribbon holes in the sleeve as well as additional hidden stitching.

Each costume also had a ceremonial cap and these were mounted onto purpose-made supports of acid free card with padding which we attached onto simple metal armatures protruding from the top of each neck at the appropriate hat height. Now as guests and members of the Fishmonger’s Hall queue to check in their coats they can marvel at the brightly coloured Doggetts uniforms and the endurance of the rowers who still compete in the oldest sporting event in the world.