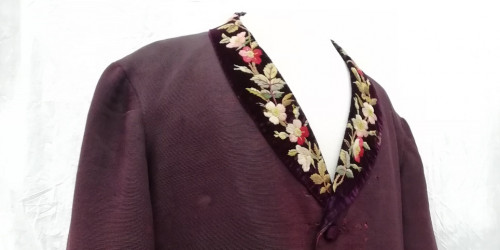 Treatment is now complete on a decadent aubergine silk man’s smoking jacket from Manchester Art Gallery for their exhibition Dandy Style opening on 4th February 2021.  The conservation was undertaken by Jamie Robinson and was generously funded by the Costume Society’s own Elizabeth Hammond Conservation Grant to ensure the jacket’s longevity on and after display.

The jacket is woven from a deep purple grosgrain silk with a brighter, almost magenta-coloured wool core.  The rich purple velvet collar and cuffs are further embellished with polychrome silk embroidery of wild roses.  Dated to the latter part of the nineteenth century, this jacket speaks of an era when smoking was considered the natural post-dinner pastime of the wealthy male, and accessorised accordingly.

The smoking jacket (as well as smoking caps and slippers) reinforced an air of playful exoticism and often featured fashionable Middle Eastern decorative motifs at a time when men’s business attire was becoming more normative.[i]

However, while many variations on smoking jacket lounge-wear exist, this example still seems somewhat at odds both in fabric and cut of the period, leading us to speculate whether it had been adapted from an earlier dress jacket.  We know that there had been a long history throughout the 18th and 19th centuries of publishing embroidery patterns for men’s smoking caps and slippers in ladies magazines[ii] – could it be that the wild roses were a slightly later edition by a proficient home embroiderer?  We may never know.

Dino-lite digital microscopy images assisted with fibre identification and damage inspection.  Using this technology we could clearly see the fabric silk wrapped wool rib construction and this added to our hypothesis that the holes to the front had resulted from pest activity – the perfect combination of tasty stains and animal fibres.  The jacket also exhibited a speckled pattern indicative of fibre degradation and the fabric had the distinctive, slightly stretchy feel of silk that is starting to break down.  This lead me to consider the acidity of tobacco smoke as a contributing factor.  It is possible that the excessive amount of pollutants in the environment that this jacket had been exposed accelerated decomposition and contributed to colour change.

While the main, glaringly obvious concern was the array of scattered holes to the front fastening, leaving me with a sneaking suspicion that its decadent wearer might have benefited from the use of a napkin tucked under the chin, the lining also exhibited minor structural issues in the form of pulls and tears from use.  Splits in the lining silk were supported onto patches of black silk habotai, carefully inserted through the holes with tweezers and couched into position with ultra-fine polyester threads.  Nylon net was also dyed and applied over the splitting lining to provide a barrier layer between the lining and the mannequin and help reduce abrasion caused during handling.

Loose embroidery threads were caught down, seams re-stitched and a hole in the lapel, likely caused by a wayward cigarette, patched with a tiny snip of colour-matched silk velvet.  All this while contemplating how best to tackle those rather eye catching holes to the front.  While a traditional infill method, involving dyeing fabric to match, inserting a patch into the hole and couching it into position, would provide the necessary structural support, this garment required the addition of something a little more experimental to disguise the exposed magenta wool core visible with the loss of silk.  The two-tone fibre left each hole with a bright red ring round the edge where the wool core had become visible when its silk wrap had been destroyed.

After experimentation I finally devised a successful technique.  Ribbed silk was sourced from Bennett Silk Ltd., dyed to match and patches of the dyed silk were cut and inserted into areas of loss.  A range of colour-matched threads were blended together and laid over the loose wool ends in a technique more akin to tapestry conservation than costume conservation.  This had the dual effect of holding the wool ends down and knocking back their eye-catching magenta hue.  The area was then couched over with a fine polyester thread with the overall effect of provided visual infill to help the eye travel over the damage without disguising the loss completely.  Certain particularly attention-grabbing areas patches were disguised further by embroidering into them with a buttonhole stitch along the ribs of the silk to replicate the texture of the original.

The edges of the jacket opening were finished with a thin strip of dyed net to protect the vulnerable turn and… Voila!  Jacket conservation complete.  Conservation was finished with the fabrication of a custom-sized Corex® box to ensure that the jacket survives the next century (hopefully with a few less spillages).

It was a mutually beneficial project – thank you to Manchester Art Gallery for providing the opportunity to work on such a glorious garment and to the Costume Society for their generous funding of the project.