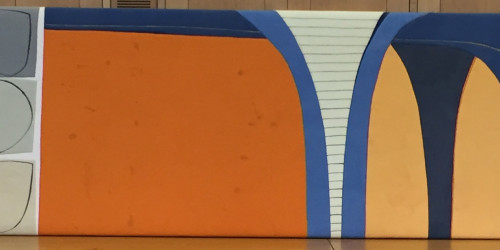 Portcullis House was opened in 2001 to provide additional office space and public Committee rooms for members of parliament and their staff.  A number of contemporary artworks were commissioned for the building and it now houses one of the UK’s largest contemporary textile collections.  Many of the early works were consigned by the architect as interior design features with an additional acoustic enhancing function.  They were not initially accessioned into the Government Art Collection and therefore no protective measures were put in place at the point of commission.  Despite being less than fifteen years old, this, plus environmental conditions within the building (designed for office use rather than museum display), have impacted on the condition of the artworks necessitating their early onset conservation.

Once the textiles were accessioned, the Palace of Westminster Curator and Collections Care Manager became concerned about the condition of some of the pieces and asked Zenzie to advise. Together they devised a conservation programme that ran over four consecutive years, during the August parliamentary recess when Zenzie headed up a team of four students from the MPhil Textile Conservation programme at University of Glasgow and the BA (Hons) Conservation of Cultural Heritage from the University of Lincoln to work together on the collection. The idea was to offer emerging professionals the opportunity to gain further practical textile conservation experience whilst making improvements to this important group of textiles.  The leap from student textile conservator to professional remains fairly wide with course lengths and practical time increasingly cut to accommodate institutional academic demand.  Therefore the chance to gain paid experience in the field, learning from highly skilled specialists, is more vital than ever.  Many of the parliamentary artworks, by leading contemporary textile artists, including Kate Blee, Jenny Moncur, Helen Yardley and, Allegra Hicks, have now been treated as a result of this project; a programme of mutual benefit to textiles and students alike.

The aim of the project was primarily to provide preventive care for the artworks; documentation, surface cleaning and any repair necessary as well as adaption of the stretchers which tapestries had been tensioned onto as part of the original design aesthetic.  While tapestries are more commonly left as free-hanging textiles, the stretchers the tapestries had originally been placed on allowed the artworks to be safely and easily moved around the building.  Although not conventional, they were part of the original design and therefore had to be adapted to make them more suitable rather than removed completely.  Students learnt as a group not only the traditional cleaning, supporting and hanging tapestry conservation techniques but how to creatively adjust them to fit the situation.

Helen Yardley’s felt acoustic panels proved particularly challenging with inherent flaws developing from the mastic based adhesive used in their construction combining with light damage which resulted in the adhesive starting to yellow and break down.  General appearance was improved through surface and spot cleaning and support stitching was added to close opening seams in the felt.  The students were given the opportunity to visit the artist’s studio to discuss production methods and adhesive alternatives now in use.  The ever increasing range of materials employed by contemporary artists makes it a tricky field to navigate; conservators are charged with predicting future deterioration but often without historical case studies to reference.  For many of the students this was their first experience of working on contemporary textile artworks, adding another dimension to the project.

While working on the individual objects, students also compiled a proposal for an ongoing surface cleaning and IPM programme across Portcullis House.  It is hoped that this project will encourage greater conservation input into the long-term preservation of this extraordinary collection.  Students from the project have gone on to take up textile conservation roles in institutions and private establishments all over the world including Edinburgh, Bristol, Norway, Australia and Singapore (and some have returned to the ZTC studio in Brighton and are still there nearly five years on).