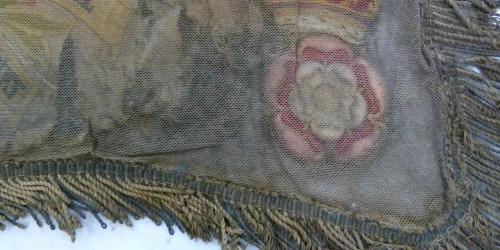 Once the initial condition survey of the colours was completed, Heather Newton Head of Conservation at Canterbury Cathedral came to the studio to discuss and negotiate the way forwards. We had many competing and sometimes contradictory aspects to consider not least our conservator’s gut instinct to want to conserve the colours in a more interventive way than perhaps the falling to dust concept allows.

Our first challenge was timing; little time remained before the colours had to be ready to return to the Cathedral to enable their rehanging and the removal of scaffolding in time for a special ceremony in late April to mark the return of the traditional daily bell ceremony to the Buffs Chapel. The chapel has been closed for the last eight years for cathedral refurbishment.

Another challenge was space; 39 colours take up a great deal of room and we had many other objects competing for space in the studio. So our wonderful technical workshop quickly made us two handsome multi shelved units to replace some of our table trestles. These enabled us to store and more easily access the most fragile colours layered up flat on Correx underneath our work tops.

Many of the colours were so fragile that even the act of handling them for assessment and cleaning could be damaging in itself. We therefore had to be very organised in both our documentation and approach, wherever possible planning to complete all processes in one go.

As outlined in Jamie and Freya’s blog, Part 1, the condition survey and photographic record we made of each of the colours has formed the main part of their conservation. Each was also surface cleaned as thoroughly as condition allowed. During our meeting with Heather it was agreed that we would also undertake extremely minimal stitched support where possible – adding to the existing historic repair in the main as this could be justified ethically as not adding conservation. Some splitting pole sleeves were repaired to prolong their functionality. And minimal stitching was sometimes added to hold loose fragments into their sandwich of existing net. However this was far more complex than it sounds as the benefits of securing floating fragments within often badly applied repair net could also be potentially damaging and therefore often proved difficult to justify.

As individual conservators we were left feeling a little frustrated that we couldn’t do more. And as a team the project prompted some of our most detailed and challenging ethical discussions to date. Debates ranged from the placement of individual lines of stitching versus potential damage this might cause in the future – to what constitutes conservation when trying to be fully respectful of the concept of allowing the colours to fall to dust when reinstated.

We as conservators generally find it difficult to accept leaving poor past repair in place. With military colours the concept of leaving them to fall to dust naturally is entirely understandable but it somehow feels problematic knowing their demise is being hastened by failing past repair. One can not help but feel a little collective responsibility and wonder too why this intervention was acceptable in the past but more considered repair is not felt to be so now. These issues prompted me to re-examine the ethics of some of our other conservation interventions. As conservators we should all touch base with our personal and professional code of ethics sometimes.

Perhaps there needs to be more debate about what it really means to let our military colours fall to dust as they hang in our churches and cathedrals. Are we really comfortable with letting these last tangible connections with those who fought and died for our rights and freedoms disappear in the next few years or decades? Would some intervention not be acceptable so that future generations can still feel this connection with our collective history through such objects? With discussion, might it not be seen to be acceptable to correct past damaging treatments in order to maintain the object for longer? Could sympathetic, minimal conservation to hold military colours in their current condition for as long as possible become ethically acceptable?

Perhaps it is time for a conference devoted to the care and conservation of military colours so that these sensitive issues can be collectively discussed.

Many textile conservators will have undertaken full conservation treatments of military colours – treatments that have been justified ethically because of the perceived significance of these individual objects. The earliest surviving colours in the Buffs Chapel date from the 1840s and the Crimean War making them not only hugely significant to the current regiment (The Queen’s Own Buffs are now amalgamated with other regiments and battalions into The Princess of Wales’s Royal Regiment) but also of great national significance.  We hope that these particular colours can be officially acknowledged for their national significance soon so that they can be sympathetically further conserved.

The 39 regimental colours were returned to Canterbury Cathedral in March where they were rehung by their conservation team in time for the special ceremony held on 24 April 2017 attended by veterans form the regiments associated with The Buffs. The ceremony was featured on BBC News South that evening.

Everyone seems thrilled with the return of the colours themselves – and the return of some of their vibrant bright colour previously hidden beneath decades of thick, grey dust.