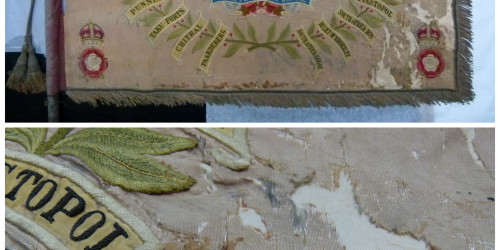 Shortly before Christmas we got an extra special delivery to the Brighton studio; a collection of 39 Canterbury Cathedral colours, predominantly from The East Kent Regiment Buffs Chapel and some from one of the cathedral Transepts.  The Buff’s Chapel is currently closed for cleaning and the flags’ necessary removal for the task provided the ideal opportunity to condition assess and surface clean them all.

As we are both conservators relatively new to the profession, flag etiquette is not a topic that we have ever had the need or wherewithal to research but history and use of an object are inextricably tied to making informed conservation treatment decisions.  With that in mind, we set about getting the basic terminology right and trying to work our heads round why these extraordinary signifiers had ended up in such a varying state of disarray.

Regimental colours command enormous respect – they are the ‘soul of the regiment’, the ‘embodiment of honour’ and relics of battle.  Their preservation is a tricky line to navigate because the process of returning them to dust and their subsequent burial is, in theory, the natural order to be revered and celebrated.  On the other hand, the reality of this slow but inevitable decline without intervention will mean that at some point there will be nothing left, no object, no symbol.  As conservators we are conditioned to want to stall degradation, but complex, interventive treatments may not always be practically, ethically, financially or temporally viable, and so we have to think laterally about how best to retain historical data.  A thorough survey is not just a preliminary process but part of the treatment itself – perhaps, one day, all that remains.

Condition varied hugely throughout the collection due to the variety of ages and range of materials used.  Our job was to determine whether the colours could be safely re-hung and assess the conservation requirements to do so.  Many of the colours had previously been hanging on open display from poles within cathedral chapels and this had caused a similar degradation pattern throughout.  The colours were very dusty, were stretched and distorted in the direction of hang and were suffering damage in areas of strain such as at along the flagpole.

The majority of the colours had been treated at some point in the past with cotton netting overlays (often machine stitched in an encasing grid) to prevent complete disintegration.  Previous treatment, whilst likely to be the only thing holding the flag together in many cases, was also having a detrimental effect, locking the tight creases in place and encouraging further splitting along fold lines.

All condition features were recorded in written and photographic documentation and diagrams, after which the colours were surface cleaned using low powered suction to remove dust and particulates.  Dust can be damaging for textiles; it can be abrasive, attract pests and encourage mould growth.  When dust is left for long periods of time it can become ingrained and impossible to remove.  After the colours were documented and cleaned they were assessed for temporary storage.  Most of the flags were rolled onto Melinex® covered card rollers, interleaved with acid-free tissue paper and polyester wadding, with the poles strapped to the outside.  A number of the flags were too delicate for rolling and were stored flat until further decisions regarding their future have been made.

Flagging Up Issues for the Future:

This project is far from over and the treatment, while simple in many respects, has been a logistical challenge from the start.  The next stage will be to collaborate with representatives from both Canterbury Cathedral and The Buffs Regiment on the safe return, storage and re-display of this highly significant collection.  While many of these flags are now in their dotage and set to continue to fade, at least by making a thorough record at this stage they have been digitally, if not physically, preserved.