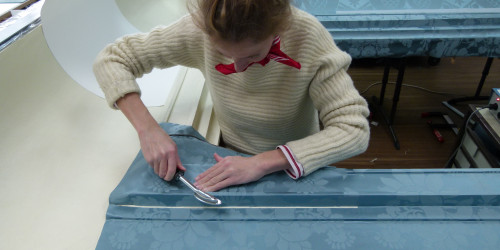 After a great response to our end of 2015 newsletter, From Caffoys to Cowboys, we’ve decided to make it a yearly tradition and round off what has been a hectic year with a Christmas greeting and few examples of what we’ve been up to these last twelve months.

As you will see Caffoy is still featuring heavily!

The year began with tapestries, tapestries and more tapestries – two 17th C Brussels tapestries from the Spangled Bedroom at Knole depicting scenes from Ovid’s Metamorphosis arrived for treatment as one of the mid 18th C Nouvelles Indies series from Arundel Castle went back on display; this was the first time in 2016 that Zenzie Tinker Conservation hit the headlines (The Times).  And then lots of stunning Henry Moore tapestries came in dirty and went back to their home, The Henry Moore Foundation much cleaner in the Spring.

We gradually undressed and assessed the conservation needs of the multilayers of costume and wigs from the twelve effigies in our remit, many of which are now undergoing conservation both here in Brighton and on site at Westminster Abbey. Some of the effigies have more than 30 items of clothing each so keeping track of each cuff, cravat and ribbon has been quite a challenge. The many other non-textile components are being treated in situ by Westminster Abbey’s Conservation Department and other specialists conservators from a wide range of disciplines.  Charles II and the child Robert, Marquess of Normanby’s costumes have recently been returned to the Abbey where filming of the re-dressing process is set to commence early in 2017.

The treasures uncovered during the process are too numerous to mention but exception must be made for Charles II’s Order of the Garter robes including his beautiful doublet and breeches in cloth of silver, trimmed with silver bobbin lace and ribbons, finally accessible for full examination at close quarters once the outer robes had been removed. These late 17th C Garter robes are thought to be one of only three sets remaining extant from this date.  The significance of the costumes and wigs (some of the earliest surviving examples) inspired a study day at Westminster Abbey in March for a small group of specialist curators which it was a great privilege to be part of.

At the other end of the costume spectrum we’ve also worked on some pieces this year with  challenging modern materials including an iconic Schiaparelli dress and jacket (with cracking cellulose nitrate coated patent leather decoration) for Manchester City Art Galleries for inclusion in the exhibition Vogue 100: A Century of Style (June – October 2016) and a double layer, acrylic Alexander McQueen bodice for Brighton Museum. See Ania’s case study on the Schiaparelli treatment.

In the late Spring we assisted the National Trust with the retrieval of our beloved, badly burnt Clandon Park State bed – we wait anxiously now to hear whether it will continue to be stored in pieces or be resurrected to its former glory with all the conservation and restoration challenges that will entail.

Click here for a film made of the retrieval process.

We’ve also helped the National Trust with the transformation of the incredibly glamorous  Kedleston Hall state bed tester using a paper shell method we devised to hold the new silk damask over the old – Minny and Geoff can be seen in a lovely film about its treatment. Maybe similar methods can be used to help restore the Clandon State bed…….

After taking on another smaller studio space on level 8 of our building, part way through the year Hazel and Chris settled in to starting the stitched support of the first of our Knole tapestries. The new space is small but perfectly formed and a very peaceful contrast to the main studio. May Berkouwer and her team are conserving the other two tapestries in the set so we have spent time ensuring our methods are the same; we spent a great day out at May’s Sudbury studio exchanging dyed wools and talking methodology.

In May Natalia and Zenzie headed down under to present another adhesives workshop this time for Australian textile conservators who were all gathered together for the AICCM Symposium, Emerging Technologies in Textiles Conservation in Sydney. Our workshop (hosted by Susanne Chee at the Museum of Applied Arts and Sciences) was one of three that delegates could attend whilst in town for the Symposium and Australia Fashion Week. We had a great three day exchange of adhesive techniques and information and really enjoyed sharing our work with old colleagues and meeting new.

And for a chunk of the summer when most people are on holiday, Mira and Zenzie worked with three more emerging conservators for the fourth year of our Palace of Westminster tapestry conservation project at Portcullis House. Running for just two weeks this year we cleaned, conserved and remounted two tapestries by Judy Clark.

Also in the summer we wrestled with metres of water stained “Bird” Morris & Co wall hangings dating from the 1920’s from the huge Drawing room at Ironmonger’s Hall, London. Four widths of the fabric were successfully removed, treated for staining and colour run using both wet and solvent cleaning techniques and reinstated in September. The results really were transformative of the jewel- like colours of the beautiful cloth. Minny and Ania gave a presentation about the project, Spills and Trills, at the recent ICON Wet Cleaning Study Day held at St. Fagan’s in Wales.  Next year think of us treating the remaining 26 widths/78 metres of Morris fabric…..

We’ve been lucky enough to spend more time at Knole in 2016 continuing to work on the early 18th C stamped wool caffoy wall coverings from the Cartoon Gallery – we ended last year with the exciting discovery of glimpses of paint from what was thought to be the original decorative scheme behind the East wall caffoy. Emma the curator hoped they might extend along the whole North wall and so we were asked to devise a method for safely releasing the top edge of the caffoy to enable it to be examined once the huge Raphael cartoon paintings were removed for conservation.  Always up for a large scale challenge we requested scaffolding the full length of the gallery and put up padded battens all the way along to prevent the heavy textile from slipping down the wall when we released the top edge.  The released caffoy was supported over a padded former whilst the painted decoration was examined and whilst we sewed on the new tape used to reattach it via replacement tacks back to the wall. We safely reinstated the caffoy on the North wall in November to big sighs of relief that our method had worked.

This slightly scary process has enabled a huge amount of curatorial information to be gathered, paint analysis to been undertaken and allowed the Knole Conservation team to make some fascinating discoveries about the relationship of the Kings and Queens portraits to the Cartoon Gallery which I am sure will all be published in due course. It’s been a huge privilege to have been involved in such an inspiring project.

The year has raced to a close with exciting surface wet cleaning test results on the wall caffoy back at Knole which will influence our approach in January when we will be part of the team working hard to complete the current phase of cleaning and conservation at our favourite National Trust house.

Oh – and just to end the year – last week saw the arrival of (many) military colours from The Buffs Chapel at Canterbury Cathedral.

It’s been a wonderful year full of fascinating projects but we are looking forward to a bit of a rest over Christmas before we leap headlong into 2017.

A huge thank you to our wonderful team of conservators and to all our clients.