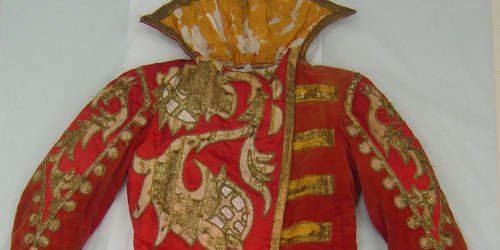 We have been lucky enough to have conserved more than twenty Diaghilev Ballet Russes costumes over the years from both public and private collections. Once when we were working on a number of Ballet Russes there was a knock at the door and man from a neighbouring business asked if he could have a look as he was curious about what he thought he had glimpsed when passing by our fast closing door. It turned out that he had been a friend of an avid collector of Diaghilev in his youth and had spent many a wild party dressed up in Ballet Russes costumes before the collection was sold at auction in the 1970’s. This was just one of the many stories we heard about their checkered past which included days abandoned in wicker trunks getting soaked on rainy wharves during their constant world tours.

In 2005 we were asked to conserve two of their incredible Natalia Goncharova costumes from the 1916 version of the ballet Sadko – In the Underwater Kingdom, for a loan exhibition. The costumes were later exhibited in their own Diaghilev exhibition in 2010 and then recently again at the Natalia Goncharova in 2019. It was gratifying to see our conservation was holding up well when we viewed them again at the Tate.

Both the Sea Prince and Sea Princess’s costumes came into the studio for major work principally to stabilize weak silk linings, sew down the damaged metal thread decorative elements and to visually improve on past conservation repairs. Here we will focus on the treatment of the Prince’s coat which was structurally sound but many of its applied elements were incredibly fragile – the appliquéd areas of both red and yellow silk and also the metal embellished areas were very problematic. Fragments of the beautiful deep  yellow silk fell from the hem area when handled as did pieces of the red silk lining. And catchy, scratchy metal threads pinged off at every angle from the stupendously bold designs so typical of Goncharova’s Russian folk art style.

After carefully humidifying the fragments of silk left in the hem, twill weave silk was custom dyed to match the egg yolk yellow and deep scarlet colour of the original. Templates were taken of each damaged area and the dyed silk was cut to shape and slipped in behind to visually restore the damaged areas without obscuring the remains of original left on top. Minimal stitching was worked to secure the original fragments to the patches and then the entire conserved hem was stabilised and brought together with an overlay of custom nylon net. This sandwiched the still fragile appliqué hem against the strong cotton substructure of the coat and further stitching was worked to hold everything together.

All the loose metal threads were patiently realigned and stitched down and the damaged lining was humidified to allow the fragments to be laid in place. Once flat they were netted to the cotton substructure of the coat to keep what remained safe. A new skirt lining was made to overlay the stabilised original as the conservation budget available would not have covered the time it would have taken to fully conserve the (hidden) lining.

The two part Sea Princess costume had a similar treatment and both costumes were mounted to great dramatic effect by the V&A for photography and display.