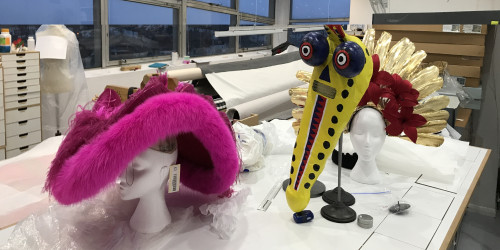 By Ania Golebiowska and Jamie Robinson

The Royal Pavilion is rather extraordinary; a celebration of styles from across the globe with no discernible links.  The Prince Regent’s ‘Pleasure Palace’ is purportedly the first case of interior design existing outside of architecture.  George IV employed the theatre designer John Nash to transform the grounds during 1815-1820, while designers Frederick Crace and Robert Jones were bought in to develop the interior in a style that later became known as chinoiserie.[1]  What better location to celebrate the illustrious career of the iconic British milliner Stephen Jones than amongst the palace’s outrageous splendour, a sight that itself inspired Jones’ 2012 collection ‘Chinoiserie-on-Sea’.  Since graduating from Central Saint Martins in the 1970s, Jones’ extraordinary creations have been sported by everyone who’s anyone, from Lady Gaga to Meghan Markle.  From Westwood to Dior, the Louvre to the MET, Jones has collaborated and been featured the world over.  In 2009 the V&A exhibited a solo show dedicated to his work ‘Stephen Jones an Anthology.’[2]

‘Stephen Jones Hats at The Royal Pavilion’ was on show in Brighton from 7th February until 9th June 2019 and the hats recently returned to the SJ Archive and their respective lenders. But this is not your average off the peg fashion exhibition.  Like the hats that Jones creates, this exhibition was entirely unique, made to measure, tailored to its site.  The curator Martin Pel and milliner Stephen Jones had been in discussion for many years about the exhibition concept.  The exhibition was initially conceived as a small spacial intervention consisting of a mere fifteen celebrity hats situated around the banqueting hall dining table, suggesting a sort of fantasy dinner party.  A far cry from the some 160+ hats on open display plus nine full costumes scattered, draped and suspended from every corner of the space.  As the deadline grew closer and the exhibition expanded a multidisciplinary team was swiftly enlisted to assist.

The Zenzie Tinker team was asked to assess and mount the hats for the exhibition towards the end of last year, yet, due to uncertainty around the exhibition funding, the process was not able to start until just before Christmas (a mere seven weeks before the exhibition was due to open in early February 2019).  An exciting project lay ahead but not without its challenges. Textile conservators are, however, nothing if not resourceful and so we set about meeting these challenges with creative solutions to the tight deadline and limited budget.

From the very beginning we had to be organised and pragmatic in our approach to mount and install the objects within the limited time frame.  We started by making lists (all conservators love a list and a good spread sheet!) and splitting hats into groups depending on the kind of mount needed.  Both Martin the curator and Stephen the designer wanted all the mounts to be ‘invisible’ meaning that they would sit inside the hat and go unnoticed by the visitors.  Yet these are not hats as we know them – they range from a giant feather mask of a seagull to a tiny rhinestone encrusted party hat worn by Rihanna.  We set about dividing the hats into groups as best we could and came up with four main types of mount; polystyrene, Fosshape®, acid-free card and stainless steel wire.

One such solution we devised for the Stephen Jones Hats exhibition was the use of polystyrene heads which many of the objects were mounted on.  These were cheap, came in two sizes and provided the round shape needed to fill the crown of the hat without too much building up or carving.  While we do not advocate using polystyrene for long term display the tight deadline and limited budget in combination with the short length of the exhibition run meant that we had to be creative with our materials and find quick fix solutions.  The hat could be set on the polystyrene head at the required angle, drawn round and the polystyrene cut away as necessarily.  Each of us developed specific techniques and grew fond of different tools but both of us loved Geoff’s Japanese saw.  The underside of the mount was then covered with a disc of card, a thin layer of polyester wadding and a top cover of black jersey secured with a drawstring to give a smooth finish and isolate the non conservation polystyrene from direct contact with the hats.

Mounts for hats with more elaborate crown shapes were made out of Fosshape®.  Fosshape® is thermoactive polyester felt with a low melting point used for costume mounting, prop making, puppetry and more as it is easy to shape, stitch and cut.  Invisible supports were made by casting the Fosshape® over a head form, heat-setting it with a steam iron and cutting away the excess, leaving a support to fit neatly inside the hat.  This was particularly useful for the turbans which required a solid insert to prevent the turban from caving in but needed to remain inconspicuous.

The third group were mounts made out of acid-free card for the smaller objects, such as Rihanna’s party hat and the kite.  Circles of acid-free card were covered with poly wadding and black jersey.  All three of these mount types had a metal washer with bolt, set to the prescribed angle and powder coated black to slot into stands, both made by Mike Penwolf from Panotechnia.  Mike is also based in New England House which made the process of coordinating mount with stand infinitely easier.

Finally, the fourth group of hats consisted of Alice bands, crowns and hats made from see-through materials.  Mounts for these hats were made from stainless steel wire in a variety of thicknesses depending on the weight of the hat and its construction.  Although the Alice band shape looks easy it was this group that were more complicated than expected.  It took several fittings and bending sessions to get the ideal shape before the mounts were stitched and secured in place with clear nylon beading wire.

While we were aware that there are a wide range of creative expertise available within New England House, it is quite rare that so many organisations club together on the delivery of a single project. Almost everything produced for the exhibition, from printed material to metalwork, came from the New England House community (or within a half mile radius). Not only did we have the benefit of face to face communication but it meant that nothing was travelling very far, saving both time and money, making good environmental sense too.

Making all the mounts in such a short time was a mammoth task but only one element of the project, made possible by the great team at the Royal Pavilion and Brighton Museum. The Stephen Jones Hats exhibition highlighted the benefit of (and need for) local networks of professional conservators and specialist craftspeople offering a wider range of external services to museums beyond the limitations of one discipline. This is something we hope to develop further in the future.

It was great privilege to work on such an amazing project, many thanks to Martin Pel and Jodie East at Brighton Museum, Mike at Panotechnia and all of our amazing collaborators along the way.