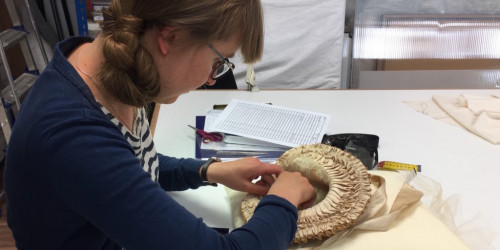 Conservation of Hats Through an Intern’s Eyes

The first month with the hats has been full of learning and important revelations for me. Getting to know the hats and their sometimes peculiar needs has taken time and energy as well as familiarising myself with the studio, its people and ways of working. Not to mention using English as a working language! That can sometimes cause headache both to me, a Finnish speaker, as well as to the listener and create, if not language barriers, language fences over which the studio folk and I are trying to reach to each other. However, these challenges can be overcome with a bit of help from the kind, skillful people around me, I am sure of it! Also, the things you learn most from are just those which require stepping out of your comfort zone.

Back to the hats! It has become clear to me by having a closer look at them that various conservation treatments are needed in order for the hats to better survive the journey to Switzerland, the exhibition time there and all the handling that is involved in the process. Many of the hats are over a hundred years old and seen some life, first while in use and then as a part of a museum collection. They have suffered some wear and tear in the hands – or heads – of their wearers and no doubt by the English winds and weathers. Splits and creases on silk ribbons, tears and holes in lining, soiling and loose parts are common damages to mention just a few. Degradation has also continued after their retirement from proper hat life and after becoming a museum object. Much damage has been done by poor storage conditions such as lack of sufficient space and support. As a result, many of the hats are squashed with structural damage, for example splits in straw work, creased ribbons and crumbling flowers. On top of that, so called ‘museum dirt’ has been accumulating on the hats during their years as a part of a collection.

As most of the hats are very fragile, careful handling as well as good support structures while working with them are crucial to their well-being. You don’t want them to suffer and get damaged even further in the hands of a conservator (or a careless intern). Good support also can make the work a touch easier. Here some simple examples:

Being aware of the fragility of an object, which deceivingly may appear perfectly stable at a first glance, and remembering to sufficiently support the object while working is a continuous learning process for me.