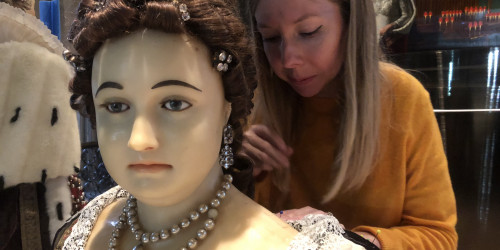 Between 2015 and 2018, we had the very great pleasure of undertaking the de-installation, conservation and re-installation of 12 costumed funeral effigies for display in Westminster Abbey’s new galleries.  Dating from 1603 to 1806, the effigies were originally created to be processed through the streets of London atop coffins of the aristocracy, and then placed in memoriam by their tombs in the Abbey as portraits of the dead.  Through the centuries these effigies became tourist attractions and thus a lucrative source of income for the lay staff of the Abbey.  They are to remain primarily tourist attractions in this new gallery and will have little interpretation other than names and dates.

Over 350 items of effigy costume were conserved by our team including; royal ceremonial robes, high fashion clothing, undergarments, stockings, shoes and wigs, and ‘props’ such as an African grey parrot, one of the earliest taxidermy parrots to survive.  The effigy bodies themselves were also a major part of the conservation being as they were, object, mannequin and persona for the costume. We undertook the work in our Brighton studio as well as on site at the Abbey as part of a multi-disciplinary team of specialist conservators assembled for the project and the smaller Westminster Abbey conservation team, which does not include a textile conservator

The full conservation audit and assessment began once effigies were removed from their display cases in early 2016.  Only then was it possible to truly appreciate the layered nature of the costume.  As conservators it is very unusual to be faced with such multi-layered costume mounted over a “mannequin” that is also part of the artifact.  We are more familiar with modern costume displays where single layers are usual and do not present so many of the challenges of access, weight, friction and concealment that these complex items gave.

While undressing it became clear that some of the costume items might be replacements and that layers of past treatment were hidden beneath the outer costume.  Very few of the effigies had any sort of conservation documentation associated with them.  It was clear that we needed to work out what had happened in the past.  The task of establishing care and conservation histories as well as wider “life histories” was huge, spanning between 200 and 400 years each.   Timelines were needed to establish what had happened to each effigy and when. To create timelines, we looked at published papers and magazine articles.  We also considered the documentation found within the Abbey archive, including a large correspondence archive, which covered cleaning and movement orders, some dating back to the 1700’s. We looked at the material evidence presented by the artefacts themselves such as stitch holes, button positions and layering, and dry cleaning labels for “Sketchley Dye Works” from the 1930’s which we were able to find documentation for in the Abbey archives. We also accessed past conservation records.

Although we thought that certain items might not be the original, the past records helped us to more confidently identify which items had and had not been replaced and how.  For example, Queen Elizabeth’s fur trimmings have been renewed at least twice and Queen Anne’s ribbon trimmings and wig, are also replacements. Research was driven by several issues; the need to know what we should see and thus what had changed, the need to understand what had been done to the objects prior to conservation and also the need to understand what conservation had been carried out.

Our main conservation aims were to treat the effigies and their costume as holistically, consistently and as minimally as possible.  We gave priority to cleaning and support – both through treatments and through improvements we could make at the re-mounting stage. We sought to respect both the past history of the artefact and its previous treatment whilst also fulfilling our 21st Century conservation aspirations to improve both the long-term conservation of the effigies and their costume layers.  We did not reverse treatments or mounting choices without good reason.

The effigies we worked on fell into two groups. The three newer effigies had hard bodies; their torsos were made mostly from wood and had a good anatomical structure. William Pitt, Lord Nelson and Queen Elizabeth’s newer effigy body were each given a layer of polyester wadding and a covering of Tyvek to mitigate against any continuing off gassing from their wood cores.  They were also given a layer of cotton jersey, which allowed the effigy to be pinned and stitched into during re-dressing.

The older, soft bodied effigies were constructed from hessian stuffed with straw and raw bast fibres known as “tow” built around metal or wood armatures.  These effigies had deformed and no longer gave sufficient support to the costume.  Our research showed that virtually all the effigies bodies had been covered in the 1930’s with a close woven, buff coloured fabric described as casement cloth.  We removed all casement coverings apart from William III’s who had lost his original hessian covering and so removing the 1930’s casement cover would have been too destructive and risky.  The soft effigies were covered with down-proof cotton fabric to contain and support the original structure, leaving it intact and also to isolate it from the overlaying costume.  Polyester stuffing was added externally to the effigies to give form where needed rather than re-stuffing the bodies. Thus the effigies could then become more of a “mannequin” for the costumes giving support from beneath.

Unlike modern costume underpinnings that are usually designed to support just one layer of costume it was challenging to accommodate our underpinnings between the many layers of heavy costume.  We had to be innovative in their design, hanging them on thin tapes to prevent building bulk at waists and necklines and using thin, rigid materials carefully shaped. We also added isolating layers where we could, for example between past adhesive treated linings that remained sticky and weak layers vulnerable to abrasion such as the gilded leather petticoat and catchy metal thread brocade petticoats. We worked with wax conservator Valerie Kauffman when dressing and undressing the effigies and took her advice with our choice of isolating layers to help protect the wax and the textiles from each other. Tyvek, Bondina and silk jersey were used in different scenarios.

Each conserved layer was carefully remounted over as much support and interleaving materials as was possible or necessary and with reference to the evidence of both original and previous mounting. Every stage was documented with photographs for the Abbey archives.

Through this project we discovered an unexpectedly rich history to the effigies; not only the history of the people they represented but also the Abbey’s attitude to them including their previous care and conservation.  The effigies are historical documents in themselves but the written and visual documentation we were able to unearth hugely enhanced our understanding of them.

The fascinating layers of costume are once more hidden from view but they have now been considered holistically as a group for the first time and are more fully documented.  With so many past interventions the project clearly illustrates the importance of documentation of all types and made us carefully consider how our own documentation would be read and used by future generations.  Our 53GB of conservation records and photographs have been added to the rest of the historic effigy archive in the Westminster Abbey library.

We are immensely grateful to Westminster Abbey for entrusting us with this momentous project and we are very proud of what we achieved. More of the individual stories about the treatment of these unique objects will gradually be published. In the meantime the newly opened Queen’s Diamond Jubilee Galleries in the Triforium of the Abbey are an exceptionally beautiful exhibition space and well worth a visit.

This Conservation Story is an abridged version of a paper by Rachel Rhodes and Zenzie Tinker given at the ICOM-CC Interim meeting focussing on costume, Abegg Stiftung, Switzerland, June 2019.