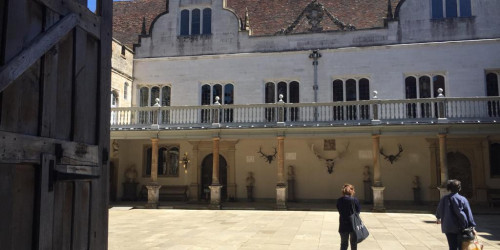 One of our most wonderful involvements has been with the ‘Inspired by Knole’ project for the National Trust. Over a six year period we conserved the wall coverings in one of the smallest rooms in the house and the wall coverings in one of the largest rooms as well as two tapestries. Much of the work was carried out on site in some of the most challenging of circumstances we have ever worked under but we all absolutely loved the project, the people and the place. Knole and all its historic dust got under our skin and is now etched into our hearts forever!

The National Trust’s £20 million project to restore and conserve the structure and contents of Knole began in 2012 and once the building had been made water tight for the first time in centuries the building conservation team came inside. We were commissioned to take down the King’s Closet ceiling and wall coverings in 2013 when it was noticed that dust and rubble from the building works in rooms above could compromised the safety of the 17th century wall coverings. By the time the treatment proposals were given the go ahead were already involved in site work else where at Knole. Our next port of call was the East wall of the Cartoon Gallery where the very patched wool stamped velvet wall hangings known as caffoy were in drastic need of conservation. They had to be worked on before the rooms were stripped in readiness for the internal building work. So the King’s Closet textiles were temporarily placed to one side while we focussed on the caffoy.

Whilst assessing the East wall caffoy we made the exciting discovery of what was thought to be evidence of the original decorative scheme in the Cartoon Gallery. The desire to undertake a wonderful archaeological investigation involving the then project curator Emma Slocombe, and NT picture frames conservator Gerry Abalone among others helped prompt the decision to take this wall covering down to treat. Suddenly it became clear for the first time that the painted frames visible in the central image below had been the original location for the Kings and Queens of England portraits that now hang in the Brown Gallery at Knole. And by mapping the nail holes Gerry Abalone thought he would be able to work out the hanging order. We were therefore asked to come up with a safe way of revealling the painted frames around the entire Cartoon Gallery.

Taking down the caffoy from the East wall was tricky but doable but proposing the same thing for the vast North and South walls was not practical or desirable. Instead we devised a method to safely roll down the top edge only, whilst temporarily securing it to the wall just below the painted frames thus preventing it from falling down. The caffoy fabric itself is lined with linen and is very heavy and now rather fragile. It is only attached to the walls via the original, failing linen tape (via rusty nails) at the edges. A long, high scaffold was built and we spent much of the winter detaching, cleaning, adding new tape via which we could reattach the caffoy after the painted decorations were recorded. The challenge paid off and it proved possible for the NT team to identify almost all the original positions of the ‘Kings and Queens’ paintings. Fragments of the original “blue stuff” , the blue damask which hung below the portraits mentioned in early inventories of the room were also found, caught in old fixings behind the caffoy. Job done, we all breathed a collective sigh of relief when we had re-secured the caffoy safely back in place.

Next we were tasked with cleaning and repairing the entire wall covering in situ. Over the next 36 months, working much of the time in the winter alongside a huge team of building contractors in freezing cold, dusty conditions, we painstakingly surface cleaned the dirty caffoy fabric, covering up the cleaned areas with tissue and Tyvek as we progressed. After consultation with Heather Porter (NT Knole upholstery conservator who had been experimenting with using micro-fibre to clean the matching caffoy upholstered furniture), we had evolved an innovative method of locally wet cleaning using water, micro-fibre cloth and terry towelling. We were able to solubilise the soil attached to the wool pile and then draw the dirty water out again using micro-fibre and cotton towelling without getting the linen ground fabric wet. The results were really rather astounding and we all watched with awe as the vast meterage of greyed reddish wall coverings were gradually restored to a deep, rich plum red colour again.

Over a three year period as well as cleaning the entire caffoy in the Cartoon Gallery and Reynolds Room we also repaired weak and splitting areas onto dyed linen support patches and were able to improve the visual presentation by tightening up loose sagging areas and judicious use of dyed net overlays. in total more than 180 square metres of caffoy were cleaned and conserved. It was so wonderful to see the cleaned caffoy positively glowing in the re-dressed rooms prior to Knole re-opening to the public in Spring 2019, to much acclaim.

All the while work continued quietly in the studio on the conservation of the two tapestries from the Spangled Bedroom, May Berkouwer’s studio conserving the other two. The set depicts scenes from Ovid’s Metamorphoses and were woven by Hendrik II Reydam, Brussels, c. 1680-1690. Each tapestry was wet cleaned in Belgium by De Wit and then given a full stitched support onto linen. Communication between our two conservation studio was important to ensure a unified finish.

In the autumn before Knole re-opened, the four conserved tapestries of the set were reunited for rehanging in the Spangled Bedroom prior to any of the other furnishings which included the newly conserved Spangled bed and matching suite of furniture. A glass screen was being installed to protect the furniture and so the original positions of the tapestries had to be altered; effectively compacting them into a smaller width. This mean a series of overlaps that were too difficult to work out in our respective studios and so the attachment of Velcro was delayed until we were on site. After much trial and error we we felt confident enough to finalised the position the Velcro and sew it in place along the top edge of each and begin the re-hanging.

Back in the conservation studio work had begun on the cleaning of the extremely soiled King’s Closet textiles, which are a wool and linen stamped fabric, the majority of which was made in the late 17th Century which some additional widths being made in the early 18th century. When removing the textiles we were excited to find the original braids hidden underneath the 19th century wool tassel braid which was not going to be reinstated.

We had to come up with a method that could be exactly replicated wet clean after wet clean because we could only wash three of the 19 widths of the fabric at once. There were also various smaller pieces like those that fitted over the door and under the window. Pinning out over templates was crucial as dimensional change would have been disastrous. The wet cleaning process was very transformative a you can see below!

Each of the groups of panels was given a full support of dyed linen using stitching, original construction was followed and those seams it had been necessary to unpick were restitched afterwards. It took 11 batches of bulk dyeing to dye the support linen which all had to be laid out and realigned afterwards prior to attaching to the fabric. The 60 metres of original braid were wet and solvent cleaned and then supported using dyed linen tape and stitching.

In late Spring 2019 the King’s Closet textiles were returned to Knole and installed in the smallest room in the house. The ceiling was first covered in natural linen to replace the red silk lining which had been made from a recycled festoon blind in the late 19th century and not reinstated. The walls were lined with a black membrane fabric first. There then began what can only be described as a delicate battle with the conserved fabric to reinstate it correctly. It was quite the most difficult thing we have ever undertaken and took weeks of patient adjustment. It was an extraordinary process to go through, gradually tensioning and tacking the fabric as straight and taut as it was safe to do – once the correct positioning of each wall panel was achieved, it seemed to suddenly relax and settle into position. The finishing touches were provided by the application of the conserved braids over the top.

Installing these wall hangings correctly was quite the most difficult thing we have ever undertaken and took weeks of patient readjustment and alteration. It was an extraordinary process to go through, gradually easing out and smoothing the still fragile fabric until it suddenly relaxed into the correct position. As the braids were gradually reapplied over the top, hiding the tacks and staples we could see that all was well and the room finally came back together again.