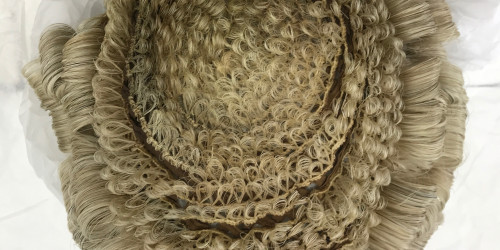 This article by our former administrator Victoria Haddock was first published in the Costume Society Newsletter, Autumn 2019

In 2018, Zenzie Tinker was delighted to be appointed as the Advisor for Conservation and Display of the Legal Costume Collection at the Royal Courts of Justice in London. The collection of legal and judicial costume and ephemera totals more than 300 items, some dating as far back as the 17th century, making it the largest and most comprehensive collection of its type in the country. Items from the collection are displayed across three sections of the majestic building that was designed by George Edmund Street and officially opened by Queen Victoria in December 1882.

The Permanent Exhibition of Legal and Judicial Costume was opened in 1974 by the then Lord Chancellor, Lord Hailsham, with the objective of compiling a record of every surviving form of historic judicial and legal costume. The collection includes examples of judicial robes from England, Scotland, Ireland, Germany, Italy, Poland, Kazakhstan and Spain. A stand out item in the exhibition is the black gown of flowered damask decorated with gold lace that was worn by Sir Herbert Hardy Cozens-Hardy (later first Lord Cozens-Hardy) in his role as Master of the Rolls from 1907-1918. The pattern of the robes, which are sometimes known as a Privy Councillors’ Robe, has changed little since the 17th century. Similar robes are still worn by Lord and Lady Justices of Appeal, the Lord Chancellor and the Master of the Rolls, and cost around £25,000 new due to their elaborate, hand worked construction of 24 carat gold embellishments worked on black silk brocade. Robes such as these pose a problem for display as they are made up of many layers of costume (shirt, waistcoat, jacket, trousers and robe) which exerts a lot of weight on the mannequin and can crush the layered costume below.

The Full Court Dress of Judges & Counsel which was made by the robe makers, Adam Ede, for Sir John Frederick Pollock in c. 1844, is a very early piece of costume in the collection. The origins of the robes date from the 17th century when Benchers of the Inns of Court, Serjeants at Law and King’s Counsel wore black gowns decorated with black lace and tufts. By the 18th century this had become ceremonial dress that was only worn in the presence of the sovereign. The collection has many fantastic examples of horsehair wigs, which many Barristers and Judges purchase second hand, as traditionally the older a wig looks the more experienced the legal professional. A 19th century full-bottomed wig of powdered horse-hair is displayed in the exhibition, worn by Clement Tudway Swanston (QC 1868) and probably by his father.

There is a dedicated exhibition space for displaying robes that belonged to the Rt Hon Lord Hailsham of St Marylebone KG CH (formerly Quintin McGarel Hogg QC) (1907-2001), who served as Lord Chancellor twice, during the 1970s and 1980s. Lord Hailsham’s State Robe of the Lord Chancellor would have be worn with a court coat and breeches, silk stockings, a full bottom wig and court shoes. The robe was worn on state occasions and is believed to date back to Elizabethan times, and to Sir Christopher Hatton who was Lord Chancellor in 1587. The black silk robe with gold thread embroidery was originally made for and worn by Lord Hailsham’s father.

The collection poses a number of challenges to care for and conserve, one of the main difficulties being that the Royal Courts of Justice is a working building, not a museum. There are two dedicated storage spaces, but these have not been purpose built to hold a costume collection and do not include a dedicated quarantine space in case of a pest or mould outbreak. The materials that the robes and accessories are made out of are also problematic. White Russian ermine trims were traditionally used on the seasonal robes that are worn during autumn and winter and each robe usually contains at least nine pelts of fur. Robes made since 2010 have used rabbit fur which is much more fragile. The horsehair wigs are also very vulnerable to insect attack. Items that are found to have moth or wooly bear damage are brought to the Studio to be frozen and cleaned, before being returned to the Royal Courts store in a custom made Tyvek bag. One of the first things we have done is to split the stores into hanging items and boxed items. As there are far fewer boxed items this has allowed us the space to make the box store into a dedicated space for storing cleaned items whilst we work through the hanging store, which is very overcrowded. We are in the process of designing the best storage system for the collection, that is simple for others to use, best protects the items and is also economic, as the Legal Costume Collection is run as a charity.

The Legal Dress collection has also only had a very limited catalogue which has never covered all of the items in the collection. This has resulted in items coming in and leaving the collection with no real evidence of provenance. Certain pieces in the collection are still occasionally used for wear in court, ceremonies and also for educational purposes, such as for Open House London events, and these items will need to be separated from the main collection for future use. My main task, as Conservation Administrator, has been to create a new catalogue system from scratch by photographing objects and giving each item its own individual number (or part number). Identifying items has been quite a challenge as none of us know all the names of the different types of legal dress and have relied on advice from staff at the Royal Courts. I have found this area of dress to be very hard to research as it is quite under-represented in articles and books.

Once we have catalogued everything in the collection we will be able to focus more on regularly rotating the displayed costume and hopefully curating some themed displays featuring items such as the wigs and women’s legal dress. We have just launched a dedicated Instagram for the Royal Courts of Justice Legal and Judicial Dress collection at @legallydressed_rcj and plan to regularly update the new website to help promote the collection.

The collection is run as a charity (charity number: 313053) and is dependent on donations to help to maintain and preserve the items. The Permanent Exhibition is open to the public from 10am – 4:30pm, Monday to Friday, and there is no admission charge to enter the Royal Courts. Tours of the exhibition can be arranged via the Legal Costume Collection’s website: https://www.rcjlegalcostume.co.uk/